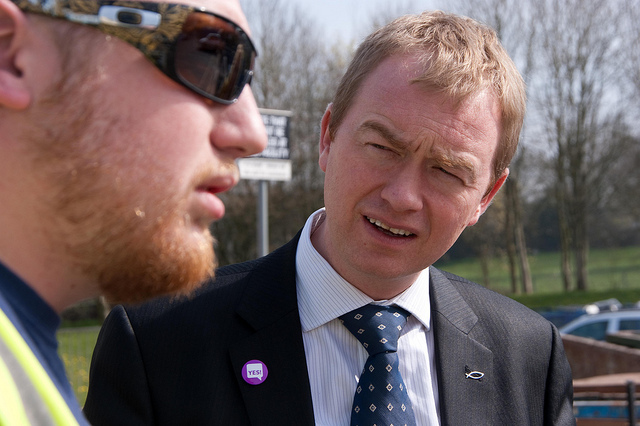 Dancing in the dark

This weekend the Liberal Democrat Party gathers in Bournemouth for their annual conference. There is not a great deal for them to celebrate, aside from having finally been liberated from their two-year conference deal with Glasgow City Council. The election saw their seats – painstakingly built up over thirty years of hard, local slog – reduced from 57 to just 8. They have hemorrhaged councilors, are down to just one MEP and lost 70% of their 2010 voters in the 2015 election. The Lib Dems have not so much fallen victim to a bump in the road as emerged bloodied from a head-on collision with the electorate. So, as they gather by the sea, this wounded tribe faces an epic and existential struggle to heal themselves. But visitors are likely to find an unexpectedly chipper gaggle of survivors. For a start, the Lib Dem base is back in its comfort zone. Their new Leader, Tim Farron, appeals to the soggy, social democratic base in a way that orange-bookers like Nick Clegg and David Laws could never hope to. He is the Liberal Democrats’ Ed Miliband – reassuring and reaffirming for the base, slightly inexplicable to ordinary voters – and they love him for it. They can even forgive his evangelical Christianity, so long as he will carry on trotting out the old religion; pro-welfare, anti-war, civil libertarian, green on energy and esoterically fascinated by the minutiae of transport policy. He makes them feel safe. Farron’s recipe for Lib Dem success is, in fact, tried and tested - an old dinner party favourite. It is the self- same blend that Charles Kennedy served up to voters for seven years and two General Elections.

And after the right-tinged centrist experiment of Nick Clegg's leadership ended in epic disaster it was not unreasonable for the party to long for the comforts of the steady and sometimes successful past. But factors outside of Farron's control mean that his feel-good retro vibe is unlikely to win back the now fourth-party's old audience. For a start, trying to outflank Labour to the Left will prove a lot less easy under Corbyn than it did under Blair. The defining positions that carved an electorate out for Kennedy - opposition to Trident, higher tax on big earners, scepticism about overseas intervention - are no longer particularly distinct from Labour Party policy.

Perhaps Norman Lamb, Farron's opponent for the leadership, would have stood a chance of appealing to despairing Blairites in much the same way that SDP rebels fled Foot for an alliance with the old Liberal Party. But it is difficult to see what the real appeal of Farron's Lib Dems would be for those concerned about the Leftist drift of Labour. Better to stay and fight for the party they belong to than to break away merely to have to fight anyway - this time in a smaller party with an equally woolly outlook. For all his hints about potential defectors, it is unlikely that Farron will be in a position to wheel out any Labour big hitters to cheer the troops at his conference. The party also faces a significant challenge from the Greens - who snatched MEPs from them in 2014 and whose dogged efforts made it possible for Labour to displace them in seats like Bristol West in 2015. All these dynamics make it hard for Tim Farron to find much room for manoeuvre.

He is searching for votes in a small but crowded market - battling to distinguish his party from Corbynist Labour and from the Greens. The obvious move would be a pivot to the centre. But Farron is constrained by both the platform on which he won the leadership and by his party's wounds. Any significant act of reach-out to disconcerted Blairites (the kind of people who hold pragmatic-centrist views but are sentimentally incapable of voting Conservative) would give the rank and file the jitters. It would involve messaging that ran something like'more sensible than Labour, kinder than the Tories' - distressingly similar to Clegg's last pitch to the country. The rank and file will not merrily march into war on that battle-cry again for a while. So the future looks almost as bleak as the recent past for the Lib Dems. The strategic wisdom of shifting Left looks highly questionable after Labour's summer spasm and any routes back to the centre are blocked for now. While the membership may be relieved to have a leadership that once again reflects their own idiosyncrasies, there is little sign that major new life will be breathed into the party any time soon. In the short-term at least, the Liberal Democrats look set to be engaged in a conversation primarily with themselves; out of sight and out of mind for ordinary voters.