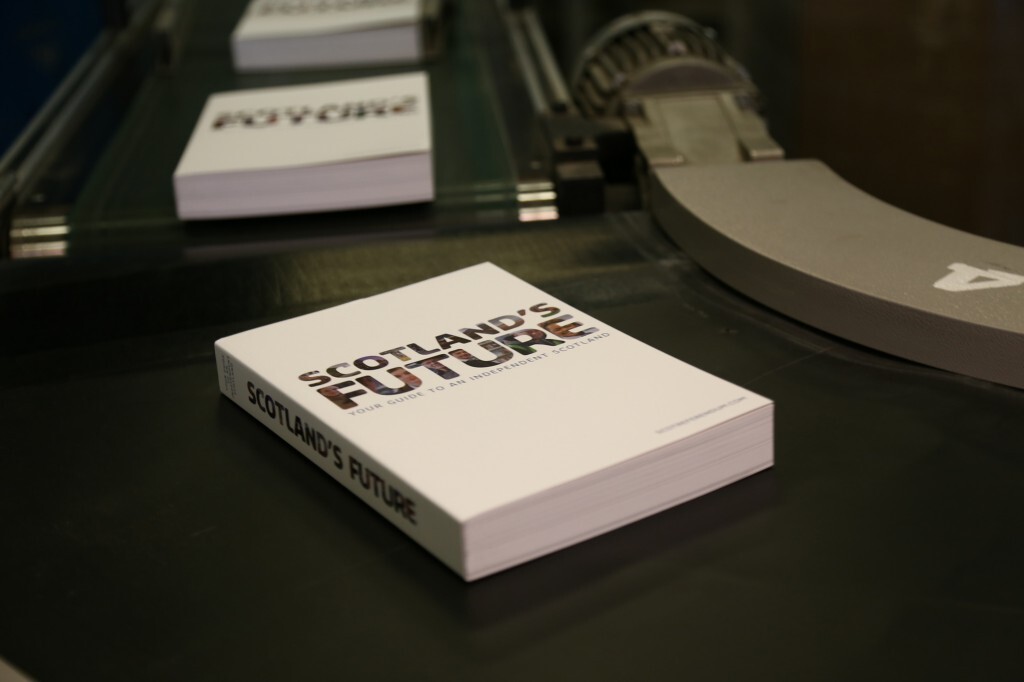 Out in the Cold

- a new currency - initially 'sterlingisation', the unilateral adoption of the pound without the protection of the Bank of England

- the flight of the financial service industries

- repatriation of defence manufacturing, including supply chain, to rUK (the remaining UK) to protect sovereign capability

- VAT on food, children's clothes and newspapers; Schengen; and joining the euro

- demands for new tax-raising powers for Wales, and powers for cities outside London

- a constitutional crisis at Westminster

The Scottish Government have been clear what they want from independence in their White Paper 'Scotland's Future'.

In any area of conflict - whether with the UK, the EU, NATO or the private sector - the assertion is that the Scottish Government's ambitions will be achieved.

This is a fantasy. No negotiations end up with one side winning 100% of everything they want - there are always compromises.

Scotland would always be the smaller of the parties in any negotiation - so start with a weak hand. The SNP Scottish Government have weakened themselves even further by setting a firm date for 'Independence Day' in 2016.

To achieve this they will have to make concessions in key areas.

The biggest area of risk is the question of what currency an independent Scotland would have.

It is increasingly clear that First Minister Alex Salmond's back-up plan would be 'sterlingisation' - the unilateral adoption of the UK's £ as the Scottish currency.

This makes no sense for a developed economy - the only countries who do this currently are ones like Panama which uses the $US and Kiribati which uses the $AUS. Scotland would be the largest economy ever to do this. And one which trades significant amounts of oil and gas.

The reality is that this could only be transitional. An independent Scotland would be battered by the markets into setting up its own currency with its own central bank.

Three consequences flow from this.

First, the financial services sector would re-locate to the rUK where it would have a central bank to bail it out. Headquarters would move immediately, but jobs will go soon too - English city mayors are already pitching to the sector.

Second, all business would have to decide what to do with contracts, assets, liabilities and cash-flow. As little as possible would be held in Scotland - capital would flow south quickly.

Third, consumers who could would move their savings and investments into £s.

This would be a moment of catastrophic turmoil.

The SNP argument against all this that a Scotland rich in energy resources - oil, gas and renewables - has a strong economy and is an attractive partner for the EU and the UK.

This is wishful thinking. Oil and gas are traded internationally and price moves with new discoveries such as fracking in the US or coal seam gas in Australia.

The reality is that the era of North Sea oil and gas is coming to an end. 1999 was the peak year of production and though there are 35 years of production left, there are only 12-15m barrels - about half the SNP estimate.

The consequence is a hole of about £2bn a year in the revenues of an independent Scotland. That's about 2% of GDP, or 5% of government spending. It would take a hike of 7p in the base rate of income tax to fill that hole.

The reality is that direct and indirect taxes would rise, as would taxes on business - probably payroll taxes - and there would be cuts in public services.

As for the cost of energy in an independent Scotland - it would rise substantially. The driver would be renewables. The SNP have a target of 100% renewables - this is delivered by existing hydro and new wind-power.

Scotland's substantial defence industry would be shattered by independence.

The removal of the Trident base from Faslane on the Clyde destroys 11,000 jobs - and the largest employer of engineering apprentices in Scotland.

Independence would also mean the end of Royal Navy contracts for shipyards in Scotland. The procurement budget would be spent in the rUK.

That has implications for other parts of the defence industry, but for the medium and long term the biggest threat would be the demands from the MOD to relocate supply chain to the rUK. The desire to secure sovereign capabilities will be intense. So, as far as possible, supply chain will be brought back to rUK. This will be particularly true were there is a high intellectual property component, as in complex weapons.

The strengthening of city regions - highly likely after the next General Election, and certain if Scotland were to become independent, would lead to competition to become a new 'Defence Quarter'.

The pressure on the budget of an independent Scotland are immense.

There is an ageing population. To put it in context the increase in the UK population between 2001 and 20014 has been 5m - nearly the same size as the whole Scottish population.

Scotland gets a subsidy of £12bn a year from the UK to pay primarily for pensions and healthcare for older Scots. This subsidy goes on Independence Day.

And the SNP plan to grow the population through skilled migration is fatally flawed. There is free movement of labour between the nations of the UK and within the EU. Essentially all the skilled workers who want to be in Scotland are there already.

On top of this there is the already mentioned fall. In oil revenues. And the loss of Corporation Tax as companies relocate in rUK to avoid the currency chaos.

The SNP spending plans as outlined mean higher interest rates in the short term and higher taxes in the long term.

No-one doubts an independent Scotland would get into the European Union (EU). The question is on what terms.

They won't be good.

France and Spain - who have separatist minorities - will demand a tough deal.

This will lead to a hike in VAT by the removal of the exemption on VAT on food, newspapers and children's clothes.

Scotland would lose the rebate.

And it would be made to sign up for the euro - no country has acceded to the EU since the euro was created without a commitment to joining. The most vulnerable point would be VAT. Not least because negotiation for accession to the EU would expose Scotland to accepting the 'acquis', the accumulated legislation. Particularly given the constrained timetable that the Scottish Government have imposed on themselves. They have, in the end, to accept the deal they are given - not the one they would prefer.

Finally, Schengen, the abolition of border controls within the EU, is part of the acquis. It would be enforced. Currently the UK is not part of Schengen. The consequence would be some form of travel controls between Scotland and the rUK.

Independence for Scotland will lead almost immediately to demands for a renewed round of devolution in the rUK.

Top of the list will be tax-raising powers for Wales, and powers for cities outside London.

Wales has the most developed agenda - the Welsh Assembly Government have already commissioned the reviews that will inform their demands.

New city-region powers will be broadly similar to those for London.

What has not been assessed in any realistic way is the impact on business. And there will be no assessment - new powers will be a political response to a political crisis.

According to EU regulations there cannot be cross-border pension fund deficits. They must be filled immediately. All options for resolving this - from separating into two companies through to filling the deficit - have substantial costs.

The Scottish Government are trying to impose a Minimum Price for Alcohol. This is probably unlawful within the UK as it distorts a single market, but they will go harder and faster after independence.

The next place they will go to is food. Health taxes will cover fat and sugar (and possibly salt).

The next General Election would be held in the middle of the SNP’s timetable for negotiations. There would be a number of implications.

On current poll figures the Labour Party will form a government with a small majority. The number of Scottish Labour MPs will almost certainly be larger than the Labour majority – Labour look set to retain their 40 existing MPs and may gain up to 3 at the expense of the Liberal Democrats. The question of their status in the House of Commons come ‘Independence Day’ is unprecedented. On the one hand, they will have been elected to a five-year fixed term parliament. On the other, they will be representing a foreign country after ‘Independence Day’ and would be expected to resign.

The difficulties mount. Senior figures in the Cabinet with international responsibilities would be affected. Both the Foreign Secretary and the Secretary of State for International Development (assuming they continue in their current briefs) – Douglas Alexander and Jim Murphy – will be Scottish MPs, that is people who will have to resign.

Thus Ed Miliband would be Prime Minister with control of the House only until Scotland’s Independence Day. The dangers are clear. A Labour government with a small and time-limited majority – and complex and demanding negotiations with the SNP – may well drift. There will inevitably be a second General Election within 18 months to two years. Either planned – though this is made difficult by the fixed parliamentary term - or triggered by a defeat in the House.

However the transition is handled there will be chaos and uncertainty.