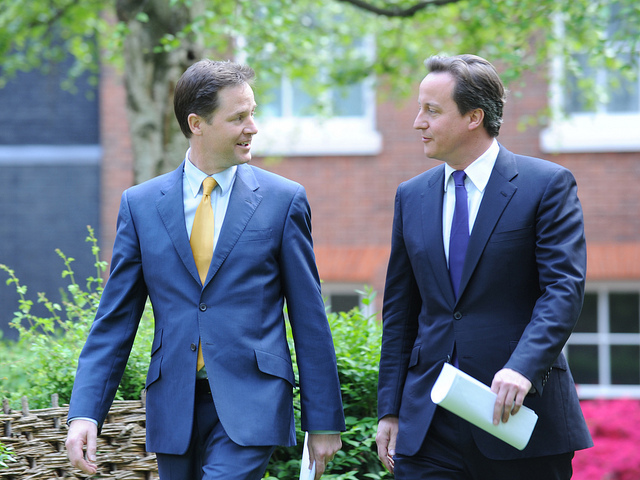 The end of the affair

After what feels like months of premature electioneering, this week the House rose for the final time this Parliament. For the Coalition it is the end of the affair. Members from marginal constituencies nervously said their goodbyes and packed-up to go and meet their fates. Retiring MPs gave their last speeches in the Chamber and anxiously begged for gossip about who might, or might not, make it on to the Prime Minister’s final list of Peers. And a cloud of apprehension – even more stark than usual at this time – hung over the Palace of Westminster, as even those members who expect to return in May contemplated the chaos they are likely to be met with once the votes are counted. This was the week when the personalities of the two men with a chance of becoming Prime Minister truly began to shape the campaign proper as the season of election theatrics really began. The public was treated to “at home with” style interviews with the leaders, the first in the series of TV debate, a final sparring session at PMQs and to cap it all last minute tear-jerking drama in the House as the Tories attempted to oust John Bercow. As ex-Obama aid and current Tory strategist, Jim Messina, is keen on reminding his clients, the public is not that interested in politics. They tune into the Westminster bubble for a few minutes a week and view the Election as a pretty straightforward battle for Number 10 between the two, main Leaders. It's in that context – of the need to cut through and the need to grab precious moments of public attention - that Miliband and Cameron have both invited TV crews in to their homes for cosy, 'I'm a pretty regular kinda guy' chats. For both of them, the kitchen back-and-forth routine was perceived to have backfired. Ed Miliband was accused of dishonesty and false modesty when he posed in a small, austere kitchenette – especially when a friend helpfully explained that this was his second kitchen, used for 'tea and quick snacks'. The notion of requiring two kitchens is alien enough to most voters, but the idea that Miliband over-spun the event and was trying to portray his home as in anyway modest was even more toxic. It reinforced a popular, Fleet Street narrative about the Labour Leader - that he's a fey, Hampstead intellectual posing as a red-meat politician – or as Jeremy Paxman put it, a “North London geek”. But whatever Ed's woes, they are nothing when set against the furore caused by the Prime Minister's set-piece interview. Cameron, also posing in his – rather more ostentatious – kitchen, told the BBC that he would not serve three terms. Immediately cries of ‘gaffe’ filled the airwaves and the column inches. Conventional wisdom dictates that any leader who confesses to not desiring permanent power confines themselves to the dust-bin of political leadership. Lame ducks encourage plotting, so the theory goes, and Cameron can now expect his Cabinet of rivals to start sharpening their knives. Cameron isn’t prone to gaffes. He is a highly-skilled operator and is well drilled by an army of staffers with a background in broadcast. Yes, he may have slipped. But it’s far more likely that Cameron has deliberately chosen to buck the conventional wisdom on the – in no way unsound – basis that the usual stratagems won’t succeed in these unusual circumstances. The Prime Minister knows that there is almost no way that he will either win a majority single-handedly or shape one from his own and the Liberal Democrats’ wins. Therefore he is eyeing up a minority Premiership – in which he plays a continuous game of Parliamentary brinkmanship to steer through central Conservative manifesto pledges whilst buying off support one vote at a time from smaller parties.

Usually, a Conservative Leader who loses not one but two elections would have no hope of survival. That being the case, Cameron’s potential assassins have a difficult cost-benefit analysis to conduct – yes, they may want rid of him and think someone else would do a better job. But do they really want to throw away the chance of a Government with a bloody, messy coup? And do they really want to waste their candidate on a hung Parliament and a vicious European referendum when they could just wait a few years and ride to the rescue when all the blood-letting is done? Add to that a further complication – that Boris can’t abandon the Mayoralty without triggering a by-election for another six months – and leaving Cameron in post becomes even more attractive. It’s that equation that Cameron was mulling when he confessed his lack of ambition for a third term – it sweetens the deal for faltering plotters if they know that he will leave anyway, of his own accord, before the next election. And that buys him time.

Last night saw the first combined TV event of the campaign too, with Miliband and Cameron shadow boxing with one another via the proxies of Jeremy Paxman, Kay Burley and The Great British Public. There were no gotcha moments and no breakthroughs either. But the event did highlight weaknesses in the pitches of both Leaders. Cameron has become more robotic since 2010 and much less personable as a result. This is music to the ears of Lynton Crosby - who wants his man brutally focused on the economy - but makes him brittle and uninspiring in interviews. Discipline is important, but it makes you vulnerable if it results in an inability to engage with anything other than your core message. And Miliband? He did well in the audience Q&A, and inevitably bettered the incredibly low expectations many had of him. But the lingering questions of character - or, at least, of his ability to communicate character - remain. For much of his one-on-one with Paxman he seemed to be delivering defensive soliloquies rather than engaging in conversation. It felt, at times, awkwardly like a man staring in the mirror and reciting 'you can do it, you're the best' over and over again. However, Ed landed one good blow on Paxman as he asserted that a Hung Parliament was not a foregone conclusion, and to audience applause told the Mighty Paxman that he was, “important, but not that important,” and that the British people will decide. The last week of Parliament also offered us more excitement that might have been expected.

We were treated to a final Miliband vs. Cameron clash at PMQs, with both men wanting to put in a better performance than usual - not to charm the public, few of whom watch or care, but to boost morale ahead of the weeks of door-knocking to follow. And it was Cameron who won the day, humiliating Miliband with a carefully laid (and Osborne shaped) trap on VAT that left the Labour Leader dangling and improvising for most of his questions. The roar of the Tory benches spoke of a party fired-up and ready for the fight. Had it been left there, the Labour benches might have been forgiven for returning to their constituencies feeling battered and bruised. But it didn't end there - because the Government got cocky. In a convoluted attempt to exact revenge on Speaker John Bercow, William Hague announced a sudden and unexpected last-minute vote on the procedure for re-electing the Speaker. This was supposed to be a dastardly final boost to Tory backbench morale - instead it turned into a desperate and humiliating farce. The Conservative Whips, ineptly lead by Michael Gove - had yet again - misread and misunderstood the mood of their own Parliamentarians. Yes, many of them loathe Bercow. But they hate over-mighty and too clever by half Government chicanery more. A dramatic day of debates – including one Tory MP eliciting a standing ovation from the Labour benches for a tearful speech denouncing the treachery of both Hague and Gove – the Government was defeated. Many Tory MPs return to their constituencies today wondering, yet again, whether they can trust or respect their own Leadership. Do these theatrics matter to the result in May? Politics is a dynamic system and morale of the troops matters in the fight, and in the aftermath.

The final exchanges of this Parliament were a tonic for the Labour troops, and a downer for the Tories. A Parliamentary Party as mistrustful of its Leaders and as eager to rebel as the 2010-15 Conservatives is a rare thing indeed. And if they come back to the House still feeling bruised and misused – with little to show, in terms of seats, for their trouble – Cameron may not even get the chance to try to negotiate his way back to power. It is stunts like the abortive Bercow coup that make some backbenchers hiss that they'd rather kill Cameron in opposition than allow him (and the Party) the dignity of a managed transition further down the line. All told, this week has been a modest boon for Labour and a period of frustration for the Conservatives. Neither side really landed a blow, though, and instead the wounds were mostly self-inflicted. Whatever Cameron's thinking, his open deliberation on his retirement plans was a distraction. And his robotic performance last night will not have won anyone new to his cause. Finally, the gimmickry – and, in the words of one Tory backbencher, 'dishonesty' - of the Government's attempted decapitation of Bercow has left the troops sore and irritable. In a long march, that kind of angst can cause a multitude of problems.