When shall we three meet again?

Last night’s ‘challengers debate’ was a peculiar creature. Five party leaders lined up to rail against a Government that wasn’t even represented. Of course, this was what Cameron and co. had hoped for – muddle and uncertainty, they believe, are the friends of a Conservative majority and the enemies of Ed Miliband. To some extent, the stratagem worked as the ‘progressive troika’ of Natalie Bennett, Nicola Sturgeon and Leanne Wood took in turns to engage is a ritual of political courting with the Labour Leader. “I want to help you be bolder” Sturgeon told him, while Wood pleaded with Ed to “join with us to stop Tory cuts”. They threw both honey and fire at Miliband, acting now unashamedly as a chorus rather than as three properly distinct voices, hoping to throw him off his game and leave him bewildered as to the appropriate response. Male politicians often flounder when debating female opponents – too easily they can come across as condescending or entitled – facing three accomplished, wily and well-liked women presented Ed Miliband with a myriad of traps into which to fall. And yet, despite the messiness of it, despite his being outflanked to the Left and despite the sexual politics, Ed Miliband did well. Many now think that Cameron's absence was a mistake, and the fact that senior Tory Ministers were on Twitter throughout the whole event suggesting answers to questions shows how frustrating it is without a dog in the fight. 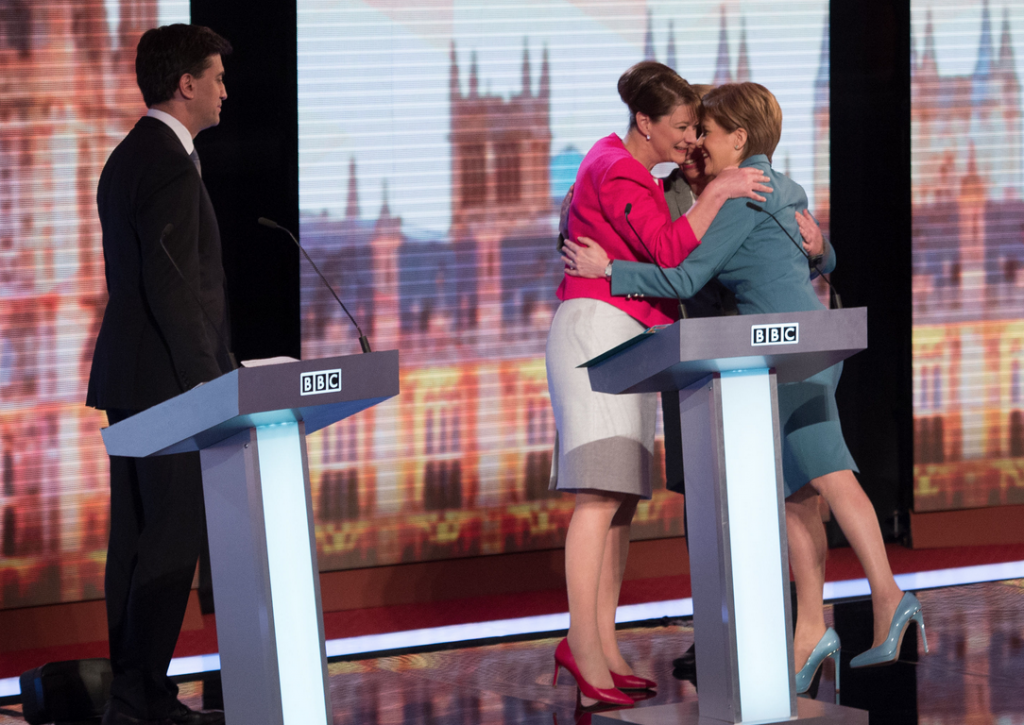 Another loser from the night was Nick Clegg who was also absent due to his being in Government, who does well in this type of event, and needs all the exposure he can get, especially with all the other smaller parties represented. Far from coming across as an entitled or ‘stale, male and pale’, Miliband took his three centre-left opponents on with good grace and seriousness. He didn’t try to detach himself from the debate – as Cameron did during the seven leader event – but answered their questions and rebutted their attacks directly. He resisted their shared agenda of ‘ending austerity’ and he calmly reminded the audience of the very real difference between his social democracy and their visions of nationalism and eco-socialism. And he displayed real flashes of anger when his sincerity – and that of his party – was called into question. What’s more, as Natalie, Nicola and Leanne all outlined the incredible programmes of spending they would embark upon in power, Miliband was presented with a rare opportunity to embody the virtues of caution and prudence – he underlined his commitment to deficit reduction and reassured on Trident and defence whilst all the while underlining his basic concern for fairness and inequality. That’s not say that Britain’s 'progressive alliance' did badly – they landed some punches, they spoke directly to their core voters and they will have represented for many a breath of fresh air.

The mantra that ‘there is an alternative’ – to austerity, to the main parties, to a politics dominated by men who look and sound alike – will have resonated. The performances were also varied with Nicola Sturgeon the brightest star by far. The picture of the three women hugging at the end will have a positive iconic resonance for women in politics. But they didn’t sink Miliband in the way that David Cameron had hoped they might. And as a result the Labour Leader emerges not only unscathed but enhanced. There was, of course, a fifth presence on stage last night. Nigel Farage ran through his greatest hits – immigrants, an EU army, HIV – all the while sounding like one of those 70’s comedians who can’t understand why no-one laughs at his mother-in-law jokes anymore. He lost it with the audience – never a good sign – and wasted sections of his allocated time trying to quiz Ed Miliband on questions to which the Labour Leader had already offered unequivocal responses. Of course, for really committed fans, the greatest hits are more than ample entertainment and the audience’s clear dislike is just a sign this country has gone to the dogs. But the wider electorate is likely to have found Farage a turn-off rather than a turn-on – ‘plain speaking’ is all very well, but less effective when folk discover that you only have one topic on which you’re prepared to speak at all. The audible sigh of boredom and bemusement when the UKIP leader blamed housing shortages on immigration may well give us some indication that public patience is running thin. Farage has not expanded his appeal during these debates but he has probably succeeded in polarising his most ardent supporters against the political mainstream – which is what he needs to do if he is to prevent as many of them as possible from sneaking back to the Tories or Labour on May 7th.

David Cameron wanted this debate to show the public how limp and leftish his opponents are. We were supposed to watch and see Ed Miliband being led around the room by the vested interests of the nationalist leaders and by the off-beam bright ideas of Natalie Bennett. It didn’t quite work out like that and the Tories will be disappointed by Miliband’s command of the situation. On defence and on the budget – arguably for the first time – the Labour Leader came across as confident, competent and credible. Prime Ministerial, one might say. But CCHQ won’t spend too much time crying over Miliband’s surprise performance – they have bigger, structural concerns. Lynton Crosby – mastermind of four victories for ex-Australian PM John Howard – was supposed to be the game changer for the Tories. But his strategy for Cameron is looking increasingly under pressure. As happened in 2010, the Tory campaign machine is breaking down into factions. It’s not always straightforward to understand who is commissioning what but, in general, attacks on Ed personally are Crosby’s work and bolder offers of new spending or tax cuts belong to those Cabinet members frustrated by his negativity – an unusual alliance of May, IDS and, at times, Cameron himself. Unfortunately this means that, win or lose, the Conservative Party will yet again be in a position to spend years arguing that the ‘evidence’ points to entirely contradictory lessons about how to campaign. As the week closes, Ed Miliband can be forgiven a wry smile. Labour have dominated much of the policy landscape and he has thrived in the televised debates that were supposed to choke his chances. Cameron, meanwhile, leads an increasingly chaotic campaign and is running out of time to turn the tide. And the ‘progressive troika’ of Sturgeon, Bennett and Wood? On May 8th, or so they hope, they’ll meet once more, when the hurly-burly's done – this time with real power in their hands. If the battle has gone their way they could well be the kingmakers that put Ed Miliband into Downing Street.