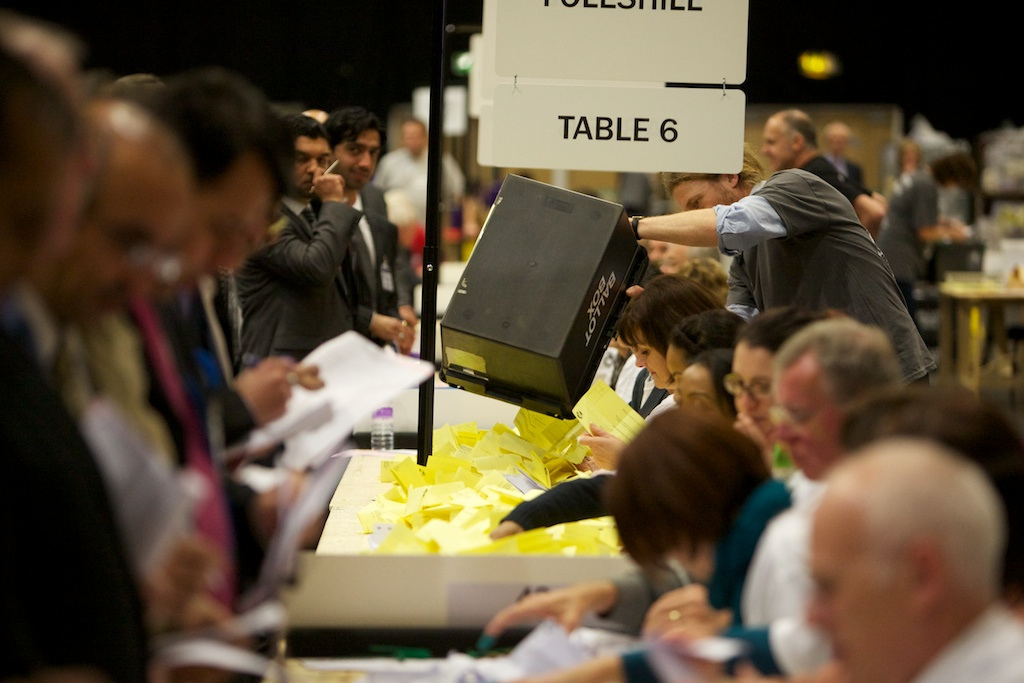 Why do people vote UKIP? That is going to be the take-home question from today’s local election results – and, indeed, from the Europeans which will be announced over the weekend. It is clear now that UKIP are able to take votes from traditional supporters of all three main parties – a trend that has shown up in the polling for some time but which Labour and the Lib Dems have studiously ignored and hoped would disappear come election day. The threat that Nigel Farage’s barmy army poses to mainstream UK politics cannot now be downplayed – a repeat of his party’s performance come the General Election would guarantee ‘no-overall-control’ and a hung Parliament – in much the same way that it is has done in councils up and down the country.

Some people lend UKIP their support for reasons of policy – be it arch-Euroscepticism, concerns over immigration or a desire for a smaller state. These people are in the minority when it comes to those who voted on Thursday. Overwhelmingly, the surge for UKIP represents a howl of rage on the part of parochial England. It is hugely significant that whilst London went Labour, the rest of the country flirted with a party that embodies a rejection of the ethics and ethos of the ‘metropolitan elite’ and their representatives in the political class. The fracture between London and the rest of the country, politically as well as economically, is deepening and widening. UKIP are benefiting.

The Conservative Party has demonstrated itself to be capable of running a deeply disciplined, on- message, slick campaign – something they failed to do in 2010 – but the truth is that even with such an efficient media machine they have failed to secure a convincing level of public support. There is campaign money but a lack of foot soldiers and this deficiency needs attention. Mindful of the traditional hammering suffered by incumbent Governments in elections at this point in the cycle, the Conservative Party will not be losing too much sleep over the results.

Labour will rightly celebrate their victory in Hammersmith and Fulham. This borough was a jewel in the Tory crown. It is an inner city, diverse and economically significant part of London which also acted as an outrider for aspects of small-state Cameroonism – it was frequently cited by George Osborne and David Cameron as shining example of urban conservatism in practice. It will be sorely missed by Tory high-command. Also significant for Labour is the fact that they have won overall control in Redbridge, an historic first. This points to a wider picture of Labour’s strengths – a very active local campaign, spearheaded by the Ilford North PPC Wes Streeting, helped Labour to a win. Ilford North is 83rd on Labour's hit list, this result will bring hope and expectation to their campaign.

The bigger picture, however, is that Labour have failed to make the significant breakthrough that would have silenced Ed Miliband’s critics. The last time these seats were contested, Labour had its poorest poll share since 1918 – all other things being equal, they should have achieved much more comprehensive gains this time around. That's not to say that there are not reasons for Labour to cheer - underlying support across the Midlands is bearing up well and key marginals such as Halesowen and Rowley Regis would return a Labour MP if today's results were repeated at the General Election.

It is clear that Labour retains public sympathy. The question is whether that sympathy is because of, or in spite of, their Leader. A recent ComRes poll found that Ed Miliband is a factor that makes 4 out of 10 voters less likely to vote Labour. Whether or not it is fair, Ed Miliband's profile became a central news story during this campaign – identifying a way to deal with this in 2015 will be a key concern for Labour staffers.

Lib Dem MPs are very worried this morning. The myth that a local base protects elected Lib Dems from national swings has now been dispelled. Whilst they will be pleased to have held on to Eastleigh, losses in places like Kingston highlight the extreme vulnerability of the Lib Dem vote share, even where they have previously enjoyed a mass of locally elected representatives. Expect Nick Clegg to be under increasing pressure from his MPs and National Executive – more and more Lib Dems regard him as a negative factor. This will only get worse when the Euro results emerge – ironically, proportional representation in European elections means that regional candidate lists lack the local and personal ties that are the traditional strength of the Party’s campaign tactics. The psychological impact upon the Liberal Democrats of losing their influence in Europe – they are the only party that, deep down, really sees the European Parliament as important and worthy of respect – should not be underestimated.

All three traditional parties are on the defensive this morning and all are looking nervously toward the Euro results. Short of winning himself, a victory for UKIP tomorrow would, ironically perhaps, now be the best outcome for David Cameron. It would focus minds on Labour’s failure to capture opposition to the Government and to build a resounding base of support. Also expect a strong showing by the Greens - it will also be important to look closely at how the SNP and Plaid fair, as this has huge implications for the General Election and the 2014 referendum. Beating UKIP into retreat in 2015, though, will not be a matter of well–placed smears about their more nutty members. The main parties need a message for England. Not just a message for London.