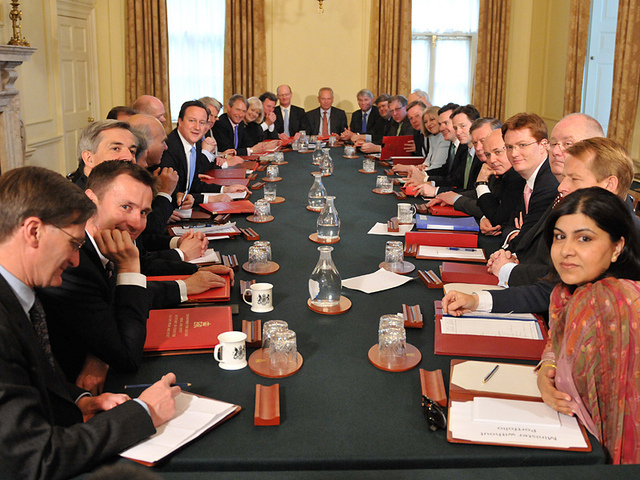 The deckchairs on Mr. Cameron’s Titanic were not so much rearranged as entirely re-upholstered this week, as he sought to put in place a top team fit for a general election. Many have described the reshuffle in terms of gender – noting Cameron’s determination to surround himself with more women in order to neutralise Labour’s attack on his very male inner circle. This is an understandable line of analysis given that the Government briefed heavily that this was a ‘reshuffle for women. It is also useful, though, to see the personnel decisions made on Monday and Tuesday in terms of generational change.

Out, for the most part, were the Conservative front-bench’s real veterans. Lots of old-fashioned, late-nineties wets lost their jobs – including Damien Green, Dominic Grieve, Ken Clarke and Andrew Lansley. A big, compensatory, Eurosceptic scalp – that of Owen Patterson – was offered up too. In come the next generation – with 2005 and 2010 intake MPs getting their hands on the big offices of state. The likes of Liz Truss, Nicky Morgan, Matt Hancock and Nick Boles simply cannot be understood in the traditional ‘wets vs. dries’ or ‘Thatcher vs. Heseltine’ mold. Those battles are finally behind the party. They all share a baseline euroscepticism, varying degrees of social liberalism (despite what you may have read about Morgan’s views on gay marriage) and the determination to win that is born of having spent one’s formative years in the wilderness of opposition.

At the very top flight Cameron exercised brutal power where necessary but avoided battles better left for another day (and for the strength he would be lent by an actual election victory). Hague was moved because he could be moved – he is loyal, unambitious and happy to do as he is asked before returning to the life of an author in 2015. Gove was demoted because Cameron needed to do two things. He had to show that he is prepared to punish even his closest friends when they behave badly – and, in his machinations against the Home Secretary, Gove is seen by colleagues to have behaved very badly indeed. And Cameron also needs to find a way of detoxifying education – Michael Gove’s relish in doing battle with teachers has become a huge problem for Lynton Crosby as he tries to establish an emotional connection between young families and the Conservative Party.

Theresa May was untouchable to Cameron – to arbitrarily move or fire the most senior woman in the Cabinet would have looked awful. Her best hope of becoming Leader of the Conservative Party is for Cameron to step down in the next year or so – should he win and remain in office until after the 2017 referendum on the EU, she would face a tough fight with a 2010 intake candidate as well as George Osborne.

IDS remains in post – to the surprise of many – in part because he is perceived to be so bad at his job. The view in Number 10 is that, if Universal Credit does implode as predicted, someone will need to be fired in the aftermath. Iain Duncan Smith is to be that sacrificial lamb.

Promotions for Michael Fallon and Phillip Hammond both send a message to the party that there’s a way back in and to the very top. Fallon was humiliatingly jobless in 2010 but has enjoyed a meteoric rise – thanks, in part, to his unbending loyalty and his willingness to defend even apparently hopeless positions on the Government’s behalf. Hammond was disappointed to not be Chief Secretary in 2010 – the Foreign Office is a fine reward for his patience.

Finally, the real oddity of coalition was exposed by the fact that Nick Clegg declined to reshuffle his top team. The peculiarity of having a Prime Minister who wields no power over his Business or

Energy Secretaries means that Cameron’s reshuffles are by necessity very tight manoeuvres. This time, for the first time, it went smoothly and to plan.

The new Cabinet is the election fighting team upon whom Tory hopes rest. Yes there are more women. Yes there are more BME people. But more importantly, this is the future of the Conservative Party asserting its right to rule. That will alienate older backbenchers. But Cameron and Crosby are convinced that it is vital to winning in 2015. It is likely that, come a leadership election in 2017 (should Cameron manage to stay in power after the election) one of his newly appointed Secretaries of State will be the man or woman challenging Osborne for the top job.